The Marquess of Winchester’s regiment will be guests of Colonel Nicholas Devereux’s Regiment of Foot at Delapre Abbey in Northamptonshire. Come to this beautiful medieval Abbey in the picturesque parkland at Delapre with a large military camp, kitchens and demonstrations of life in the 17th Century at the beginning of the English Civil Wars 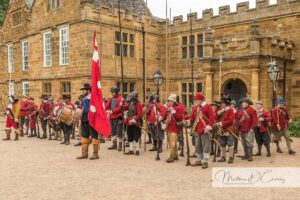