We are very pleased to announce that the Marquess of Winchester’s Regiment will be retuning to its spiritual home for a series of re-enactment displays over the weekend 16th-17th October. This particular weekend has been chosen as it is the closest to the anniversary of the final fall of Basing House, in October 1645.

There will be displays of both military and civilian life in the seventeenth century. The soldiers will demonstrate the use of the pike and the musket and you will have a chance to have a close look at both and maybe even try some armour on. The civilians will be showing examples of various aspects of normal life in the period.

At the close on Sunday, there will be a short ceremony to commemorate those who were involved, on both sides, in the three sieges, and all those from this violent, but defining time in our history. 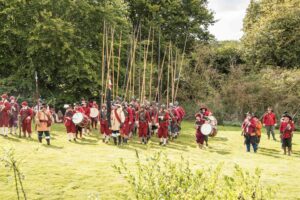