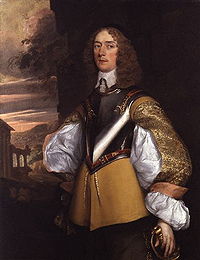 GAGE,SiR HENRY(1597-1645), royalist officer, son of John Gage of Haling, Surrey, and great-grandson of Sir John Gage, was born about 1597, and, as his family were strong Catholics, sent to Flanders at the age of ten to be educated. Thence, after a short residence in France, he went to Italy, ‘ where under that famous scholar Piccolomini he heard his philosophy, and with great applause did publicly defend it’. At the age of twenty two Gage entered the Spanish service, and for twelve months ‘trailed a pike ‘ in the garrison of Antwerp. He was then offered a company in the regiment raised by Archibald Campbell, seventh earl of Argyll, and distinguished himself in its command at the siege of Bergen-op-Zoom (1622) and Breda (1624). The reduction of the English regiments in Spanish service after the fall of Breda, and the outbreak of war between England and Spain, obliged him in the following year to return to England Gage devoted his enforced leisure to the study of the theory of war, which was throughout his life his favourite pursuit. During this period he also translated Hermannus Hugo’s account of the siege of Breda from Latin into English, and Vincent’s ‘ Heraldry’ from English into French. In 1630 Sir Edward Parham offered Gage the post of captain-commandant in an English regiment which was being raised for the service of Spain, and he spent the next twelve years in the war in the Netherlands. He obtained a commission to raise a regiment himself, levied nine hundred men, and, on the death of Sir William Tresham, ‘ had his regiment completed by the addition of the old unto it, which his highness the prince-cardinal bestowed  upon him ‘. Gage’s chief service during this period was the defence of Saint-Omer in 1638. In 1639 he suggested to the English government to offer the privilege of recruiting the English and Irish regiments in Spanish service to the number of ten thousand men, in return for 4,400 Spanish veterans to be used in Scotland. Secretary Windebanke authorised negotiations, but the Spanish government refused to hear of the proposed exchange. Gage was also unsuccessfully employed in 1639 to negotiate a loan of 150,000/. from Spain as the price of protecting the Spanish fleet from the Dutch. When the civil war broke out, Gage used his influence to intercept the parliament’s supplies from Flanders, and is said to have ‘ deprived the rebels of thirty thousand arms, and afforded his majesty eight thousand of those that were intended to be borne against him ‘. He returned to England about the spring of 1644 to enter the king’s service. When the king left Oxford he named Gage one of the military council appointed to assist the governor. In spite of the opposition of the governor, he speedily infused a new spirit into the defence of Oxford. On 11 June he captured Borstall House, on 11 Sept. relieved Basing House, and on 25 Oct. helped to raise the siege of Banbury. The relief of Basing was one of the most remarkable exploits of the whole war ; Gage’s own account is given at length by Walker, and copied, with some additional particulars, by Clarendon.