The 2nd Footguards – The Coldstream Guards 1685

As most of you are aware, we are resurrecting the Winchester’s alternative personality as the Coldstream Guards of 1685, so we can offer an interesting alternative to potential sponsors.  So why pick 1685? Well on the morning of 6th July 1685 the Coldstream Guards tumbled out of their tents into line to fight off a surprise attack (and one not at 3pm as usual!) from the Duke of Monmouth’s rebel army of west countrymen.  Thanks to a well-documented army review the previous year we have a pretty good idea on the appearance of the Coldstreamers that morning on Sedgemoor.

To help us all understand a little more about this period I’ve been asked to give a little background for beginners.  So, where to start?  This time round, I’ll think we better look at the Kings and Queens involved. We all know that Charles I was horribly murdered by the repulsive rebels in 1649 and that his son was eventually restored to the throne in 1660 following the death of Oliver Cromwell and the failure of his successor (Richard Cromwell aka Tumbledown Dick) to secure a stable government.  Charles II was the total opposite to his father and just let’s say he enjoyed life to the full.  Between 1649 and 1660 he led a nomadic life around the courts of Europe and at one time became involved with a Lucy Walter, from Havordwest, Wales (uh oh!) the royalist mistress of a English officer serving in the Dutch Army.  In 1649 she bore Charles a son, James who Charles acknowledged and created Duke of Monmouth.  There were rumours circulated that they were married in secret but there is no evidence to support this idea.  Lucy’s relationship with Charles ended around 1651 but she stayed in the court in exile until her death in Paris 1658. 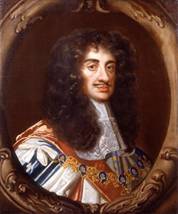 On 29th May 1660 Charles II was received in London to public acclaim and restored to the throne.  On 23rd June 1661, a marriage treaty was signed with Catherine of Braganza from Portugal.  Unfortunately, that marriage wasn’t blessed with any children, although Charles had no less than fourteen illegitimate children from seven mistresses.  And therein lies the problem.  Next in line to the throne was Charles’ brother James, Duke of York who was an unapologetic Catholic, which was totally unacceptable to large portions of Parliament and the country.  During Charles’ reign the Duke of Monmouth, who was a Protestant, became very popular with the people, becoming a major military commander and even undertaking a “Royal” progress through the West Country.  This caused a great deal of resentment from the Duke of York and so Monmouth eventually fled into exile in the United Provinces.  It could be said that Charles used Monmouth as a political counter to control his brother the Duke of York.

On King Charles II’s death in February 1685 James II was declared King and Monmouth rebelled, landing with three Dutch ships at Lyme Regis in Dorset in early June in an attempt to take the throne from his uncle. He published a “Declaration for the defence and vindication of the protestant religion and of the laws, rights and privileges of England from the invasion made upon them, and for delivering the Kingdom from the usurpation and tyranny of us by the name of James Duke of York”. 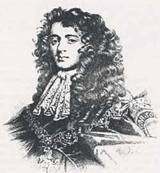 Monmouth declared himself King at various places along the route of his march on London, including Axminster, Chard,Ilminster and Taunton. Protestant yeomen flocked to his colours but the Royalist forces closed off Bristol and forced him back to Bridgewater.  On 6 July 1685 the two armies met at the Battle of Sedgemoor, the last clear-cut pitched battle on open ground between two military forces fought on English soil: Despite undertaking a daring night time march and almost complete tactical surprise Monmouth’s makeshift force could not compete with the regular army, and was soundly defeated. Monmouth himself was captured and arrested at in Hampshire.

Despite begging for mercy, he was executed by Jack Ketch on 15 July 1685, on Tower Hill. It is said that it took multiple blows (either seven or eight) of the axe to sever his head.  James II sent the notorious Judge Jeffreys into the West Country to exact a bloody revenge on Monmouth’s followers, over 300 were hung, drawn and quartered and nearly 900 sent as slaves to the West Indies. The national horror at the Bloody Asszies and James’ preferment for Catholics in government and the army led to widespread resentment.

King James’ policies of religious tolerance after 1685 met with increasing opposition by members of leading political circles, who were troubled by the king’s Catholicism and his close ties with France.

The crisis came to a head in 1688, with the birth of the King’s son, James Francis Edward Stuart, on 10 June  This changed the existing line of succession by displacing the heir presumptive, James’ daughter Mary, a Protestant and the wife of William of Orange, with young James as heir apparent. 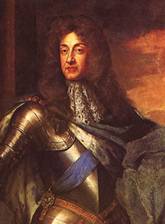 The establishment of a Roman Catholic dynasty in the kingdoms now seemed likely. The most influential leaders of Parliament invited William III of Orange to England.  William crossed the North Sea and English Channel with a large invasion fleet in November 1688, landing at Torbay. James’s regime collapsed, largely because of a lack of resolve shown by the king, after just three years of rule.

Arguably, James’s overthrow (aka the “Glorious Revolution) began modern English parliamentary democracy: the Bill of Rights of 1689 has become one of the most important documents in the political history of Britain and never since has the monarch held absolute power.  The expression “Glorious Revolution” to reflect the overthrow of James is an expression that is still used by the British Parliament. The Glorious Revolution is also occasionally termed the Bloodless Revolution, albeit inaccurately. The English Civil Wars were still within living memory for most of the major English participants in the events of 1688, and for them, in comparison to that war and the Monmouth Rebellion of 1685 the deaths in the conflict of 1688 were mercifully few.

James II fled to Ireland to raise a Catholic Army to invade England, however before he could complete his plans William led a joint English, Dutch and Danish army to Ireland and defeated James at the Battle of the Boyne in 1690.  James fled into exile but the Jacobite (Jacob in Latin = James) cause lived on with rebellions on his behalf (and his son -the famous  Bonnie Prince Charles) in 1689, 1715, 1719 and 1745.

So in the 1680s we had no less than three monarchs – Charles II, (died 1685), James II (overthrown 1688) and William and Mary.  As the Royal cypher (CR, JR and W&M) was on a regimental flag you can see that the army’s flag makers were kept busy!  And each had their own ideas on military dress and appearance, making it very difficult to be 100% certain on uniform details as changes filtered through the system. However, thanks to researchers and the records from the Royal review we can be pretty confident on what the Coldstream Guards wore that July morning.