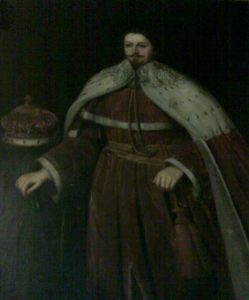 John Powlet, fifth Marquess of Winchester, was remarkable for his steady loyalty to Charles I. He garrisoned for the king his fine castle at Basing, and underwent a siege of two years, from August 1643 to October l6th, 1645 ; on which day it was taken by Cromwell, by storm, after having been defended with great gallantry to the very last extremity. The Marquess had written, in every window of the house, with a diamond, the motto Aymez Loyaulte. The parliamentary leaders, incensed at this device, burned down this noble seat, (a conflagration which Cromwell imputes to accident,) and destroyed and plundered property to the amount of L. 200,000. The Marquess himself was made prisoner. The particulars of this memorable siege were printed at Oxford, in 1645 ; and Oliver’s account of the storm is published in Collins’s ” Peerage,” from a manuscript in the Museum.

The Marquess of Winchester survived the Restoration; and, having died premier marquess of England in l674, was buried at Englefield. This monument, upon which our author’s verses are engraved, is made of black and white marble; and a copartment underneath the lines bears this inscription:

Here lieth interred the body of the most noble and mighty prince, John Powlet, Marquess of Winchester, Earl of Wiltshire, Baron of St John of Basing, first Marquess of England : A man of exemplary piety towards God, and of inviolable fidelity towards liis sovereign ; in whose cause he fortified his house of Basing, and defended it against the rebels to the last extremity. He married three wives : the first was Jane, daughter of Thomas, Viscount Savage, and of Elizabeth his wife, daughter and co-heir of Thomas Darcey, Earl of Rivers; by whom he had issue Charles, now Marquess of Winchester. His second wife was Honora, daughter of Richard Burgh, Earl of St Alban’s and Clanricarde, and of Frances, his wife, daughter and heir of Sir Francis Walsingham, knight, and principal secretary of state to Queen Elizabeth; by whom he had issue four sons and three daughters. His last wife, who survived him, was Isabella, daughter of William, Viscount Stafford, secund son of Thomas Howard, Earl of Arundel and Surrey, Earl Marshal of England, and of Mary his wife, sister and sole heir of Henry, Lord Stafford, who was the heir-male of the most high, mighty, and most noble Prince Edward, last Duke of Buckingham of that most illustrious name and family, by whom he had no issue. He died in the 77th year of his age, on the 5th of March, in the year of crar Lord 167 4.—By Edward Walker, Garter King of Arms,”