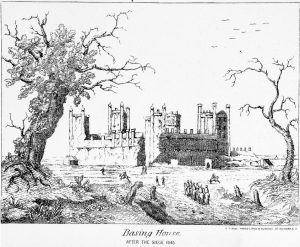 Cromwells letter of the Storming of Basing House
To the Honourable William Lenthall, Speaker of the Commons
House of Parliament

I thank God, I can give you a good account of Basing. After our batteries placed, we settled the several posts for the storm: Colonel Dalbier was to be on the north side of the House next the Grange; Colonel Pickering on his left hand, and Sir Hardress Waller’s and Colonel Montague’s regiments next him. We stormed, this morning, after six of the clock: the signal for falling on was the firing four of our cannon; which being done, our men fell on with great resolution and cheerfulness. We took the two Houses without any considerable loss to ourselves. Colonel Pickering stormed the New House, passed through, and got the gate of the Old House; whereupon they summoned a parley, which our men would not hear. In the mean time Colonel Montague’s and Sir Hardress Waller’s regiments assaulted the strongest work, where the Enemy kept his Court of Guard; — which, with great resolution, they recovered; beating the Enemy from a whole culverin, and from that work: which having done, they drew their ladders after them, and got over another work, and the house-wall, before they could enter. In this Sir Hardress Waller, performing his duty with honour and diligence, was shot in the arm, but not dangerously.

We have had little loss: many of the Enemy our men put to the sword, and some officers of quality; most of the rest we have prisoners, amongst whom the Marquess ‘of Winchester himself,’ and Sir Robert Peak, with divers other officers, whom I have ordered to be sent up to you. We have taken about ten pieces of ordnance, with much ammunition, and our soldiers a good encouragement.

I humbly offer to you, to have this place utterly slighted, for these following reasons: It will ask about Eight-hundred men to manage it; it is no frontier; the country is poor about it; the place exceedingly ruined by our batteries and mortar-pieces, and by a fire which fell upon the place since our taking it. If you please to take the Garrison at Farnham, some out of Chichester, and a good part of the foot which were here under Dalbier, and to make a strong Quarter at Newbury with three or four troops of horse, — I dare be confident it would not only be a curb to Dennington, but a security and a frontier to all these parts; inasmuch as Newbury lies upon the River, and will prevent any incursion from Dennington, Wallingford or Farringdon into these parts; and by lying there, will make the trade most secure between Bristol and London for all carriages. And I believe the gentlemen of Sussex and Hampshire will with more cheerfulness contribute to maintain a garrison on the frontier than in their bowels, which will have less safety in it.

Sir, I hope not to delay, but to march towards the West tomorrow; and to be as diligent as I may in my expedition thither. I must speak my judgment to you, That if you intend to have your work carried on, recruits of Foot must be had, and a course taken to pay your Army;’ else, believe me, Sir, it may not be able to answer the work you have for it to do. I entrusted Colonel Hammond to wait upon you, who was taken by a mistake whilst we lay before this Garrison, whom God safely delivered to us, to our great joy; but to his loss of almost all he had, which the Enemy took from him. The Lord grant that these mercies may be acknowledged with all thankfulness: God exceedingly abounds in His goodness to us, and will not be weary until righteousness and peace meet; and until He hath brought forth a glorious work for the happiness of this poor Kingdom. Where in desires to serve God and you, with a faithful heart,

Your most humble servant,